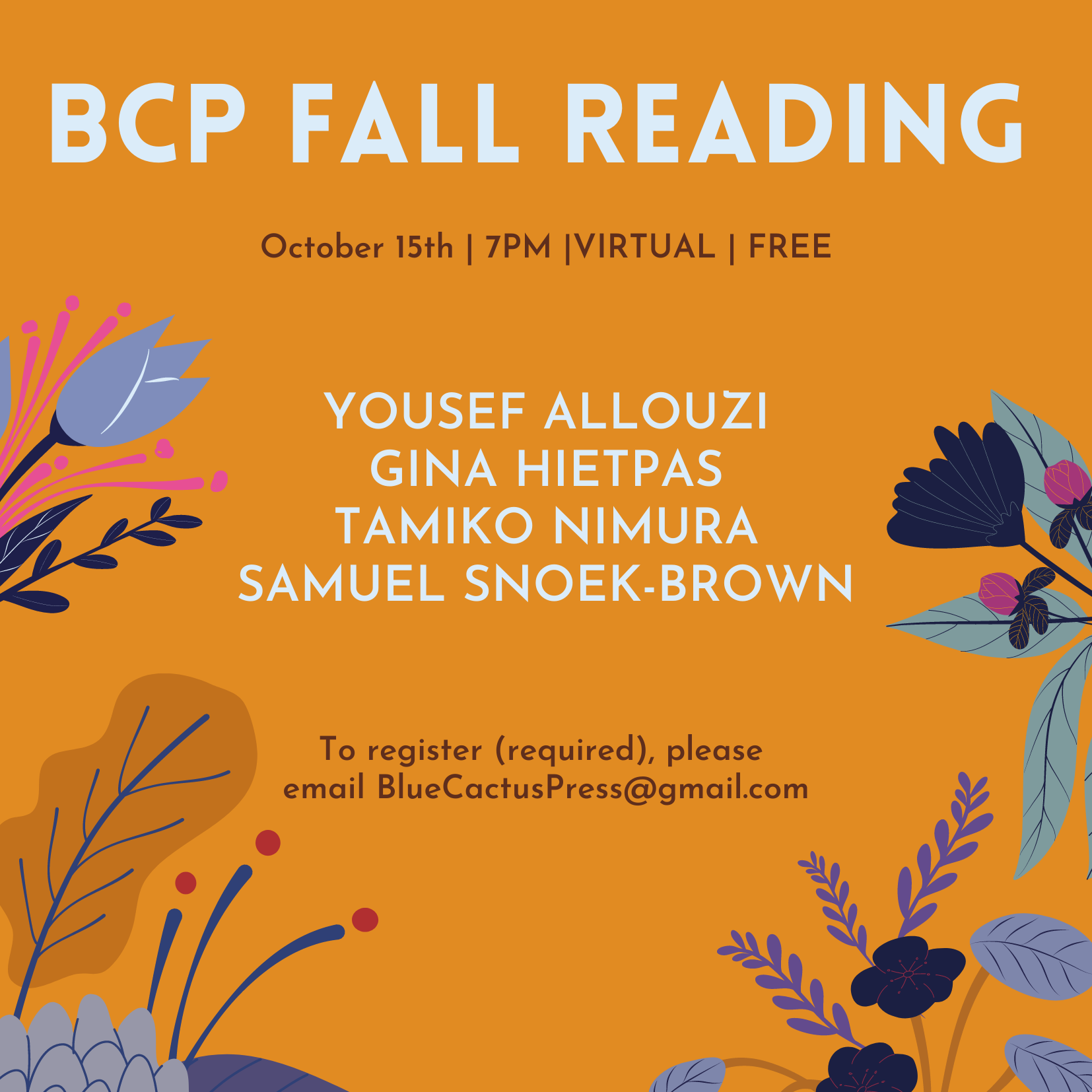 For those who couldn’t make it to our Fall Reading, never fear: we recorded the full event! You can now enjoy it at your convenience! Our reading lineup was made up of authors whose non-fiction writing graced our pages (and screens) earlier this summer. The lineup included Yousef Allouzi, Gina Hietpas, Tamiko Nimura, and Samuel Snoek-Brown. Grab a glass of wine, sit your butt down in a soft chair, and hit play, friends!

YOUSEF ALLOUZI is an author and data analyst currently living in the Pacific Northwest. He holds a BS in Economics and a Master of Public Policy from Oregon State University. He’s also the author of The Bedouin, a memoir essay and chapbook published in July, 2020 (Blue Cactus Press).

GINA HIETPAS is a self–taught poet, born and raised in Tacoma, Washington. Nowadays, she lives outside Sequim, Washington, on a small farm with her husband, a few cows and a passel of chickens. She’s the author of Terrain, a poetry collection delving into allyship, healing, nature and care, published in September, 2020 (Blue Cactus Press).

SAMUEL SNOEK-BROWN teaches and writes in the Pacific Northwest. He’s the author the Civil War novel Hagridden, the short story collection There Is No Other Way to Worship Them, and flash-fiction chapbooks Box Cutters and Where There Is Ruin. He also works as a production editor for Jersey Devil Press, and he lives online at snoekbrown.com.

Did you miss the official launch of Gina Hietpas’ debut poetry book, Terrain,on September 10th? Don’t worry if you did, we recorded the event so those who didn’t get a chance to join us could tune-in later! Watch the video below to hear Gina read from Terrain, and to hear a short Q&A with the author afterward. Enjoy!

INTRODUCTION: Gina was introduced by Tim McNulty, a poet, essayist, and natural history writer. He is the author of three poetry collections: Ascendance, published by Pleasure Boat Studio, In Blue Mountain Dusk, and Pawtracks, and ten poetry chapbooks, including Cloud Studies, published by Empty Bowl. Tim is also the author of eleven books on natural history, including Olympic National Park: A Natural History (4th edition released in 2018 from University of Washington Press), and Washington’s Mount Rainier National Park. He contributed an introductory essay to a reissue of Murray Morgan’s Olympic Peninsula classic, The Last Wilderness. Tim has received the Washington State Book Award and the National Outdoor Book Award among other honors. He lives in the foothills of Washington’s Olympic Mountains and is active in Northwest environmental issues. Tim’s website is timmcnultypoet.com.

Q&A: After Gina’s reading, Holly J. Hughes moderated the short Q&A session between Gina and audience members. Holly is the author of Hold Fast, Passings, and Sailing by Ravens, co-author of The Pen and The Bell: Mindful Writing in a Busy World, and editor of the anthology Beyond Forgetting: Poetry and Prose about Alzheimer’s Disease. Her fine art chapbook Passings received an American Book Award in 2017. After commercial fishing for salmon in Alaska, skippering a 65-foot schooner, working as a naturalist on ships, and teaching writing at the college level, she now lives on the Olympic peninsula, where she leads writing and mindfulness workshops in Alaska and the Northwest and consults as a writing coach. Find her online at hollyjhughes.com