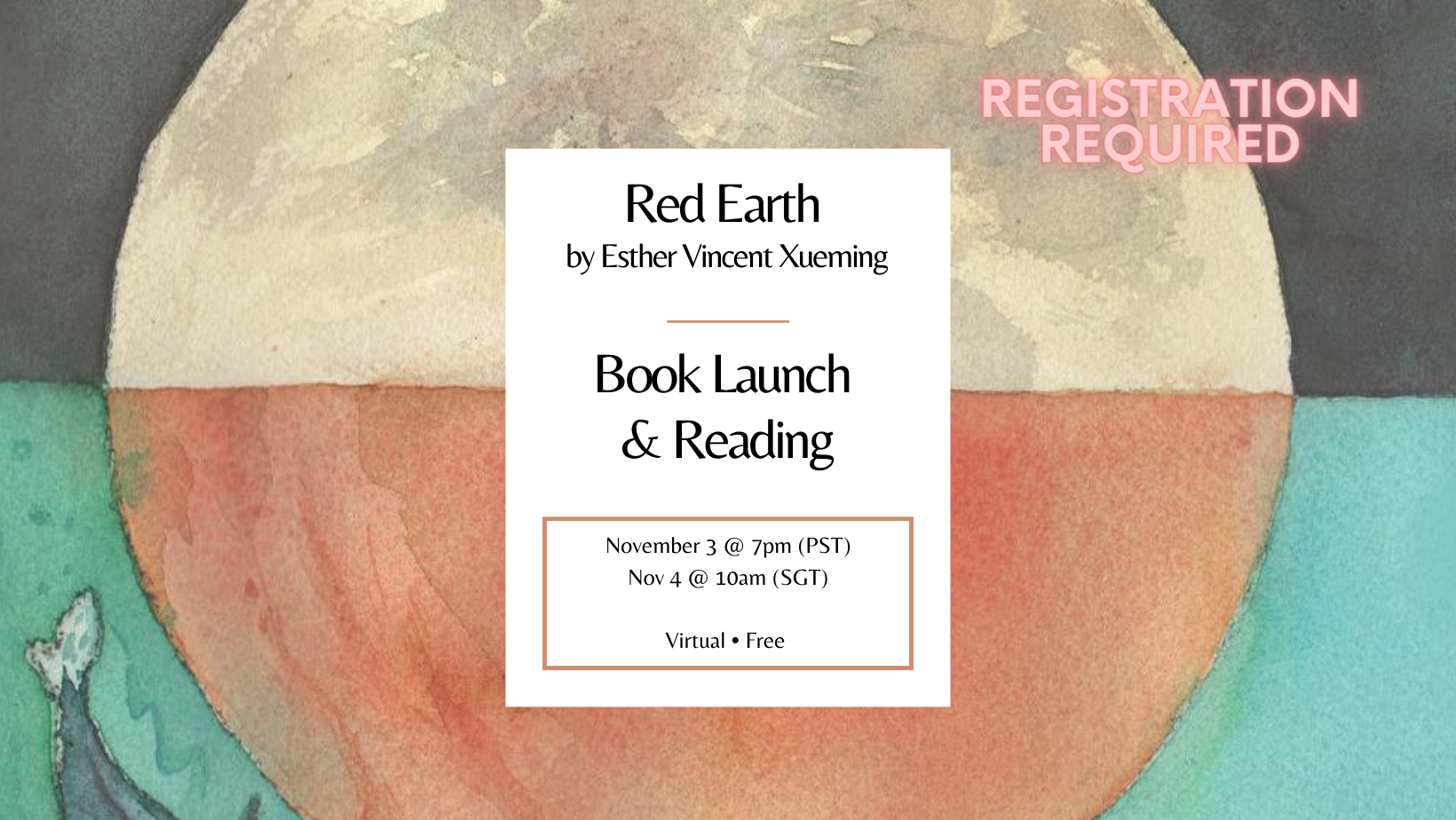 On November 3, Blue Cactus Press and readers in the U.S. and Singapore all hopped on zoom to celebrate the official launch of her debut poetry collection, Red Earth. The event kicked off with a few words from the publishers of Blue Cactus Press and Pagesetters, whom collaborated over an ocean to bring this incredible collection of poems to life, and words from Illustrator and artist Shuyin, poet Gina Hietpas, and author and editor Yeow Kai Chai. The main event included readings by Esther Vincent Xueming, followed by a casual Q&A from audience members.

Esther Vincent Xueming is the editor-in-chief and founder of The Tiger Moth Review, an independent eco journal of art and literature based in Singapore. She is the author of Red Earth and co-editor of two poetry anthologies, Poetry Moves (Ethos Books, 2020) and Little Things (Ethos Books, 2013), and Making Kin, an ecofeminist anthology of personal essays by women writers in Singapore (Ethos Books). A literature educator by profession, she is passionate about the relationships between art, literature and the environment. Follow her on Twitter @EstherVincentXM.

Robert Lashley’s book launch for Green River Valley was powerful and surprisingly emotional (in positive ways), thanks to Robert, who shared his poems and experience in the editorial process, and guests Jodi Poorwill, Graham Isaac, and Kellie Richardson!  Watch the video below, then scroll down for some cool BONUS CONTENT from Robert!

Fans of Robert will be delighted to know he put together a reading list of 10 books that influenced Green River Valley! Read below to get a sense of who and what had an impact on Robert and his writing over the years!

1: The Panther And The Lash by Langston Hughes

A lost classic of African American poetry, written as a homage to the Harlem that never ignored him long after chic poetry movements did.

Schooled in the modernists and the Harlem renaissance poets, adept in tight forms and ornate Jacobean blank verse, Brooks made her people, city, and block in Brownsville as eternal as any poet’s in the living world.

Heaney is one of world poetry’s great adults, stylists, and working class heroes. He wrote about Ireland in such a beautiful, universal, and precise way that made a ghetto nerd from 23rd and G see himself in it.

Where Walcott ends his remarkable (if flawed) career with one of the strongest books of poems he’d ever written; a lean, exact, and gorgeous collection immersed in nothing but the fundamentals of his gifts.

Mistral wrote about motherhood, poverty, folklore, and layers of oppression; and did so in poems so impressive that much of the world was compelled to take notice.

6: View With A Grain Of Sand by Wisława Szymborska

For my money, Szymborska is poetry’s great misanthropic philosopher; and like every great misanthrope, the sharpness of her wit was that wall that guarded a heart affected by WWII, Stalinism, and the callowness of the human condition in a modern age.

This book is an ambitious, one-man excavation of Black American history from the slave trade to present of his time, with numerous symbols of and references to Black history, culture, and folklore. Also one of English language poetry’s great stylists, with a supple ear to fuse black vernaculars with a grand, lyric, formal language.

Deep blues, heavily invested in the oral tradition, no-bullshit barometer and gangsta-ass take on formalism? Wanda is like a literary parent to me.

In creating a Christian conversion story, Eliot humanized his towering voice, turning from the surfeit data and darkwarter bigotries of his earlier work to a more empathetic perspective on the human condition.

10: The House On Marshland by Louise Gluck

At first I was surprised that her nature poems didn’t have the haunted stripped down sorrow of early Frost, or the mercilessly kinetic Darwinism of Dickinson’s gangsta ass pastorals. However, that very gentle need of hers to find a way beyond the blues makes her nature imagery work for me.

Robert Lashley is a writer and activist whose  was a 2016 Jack Straw Fellow, Artist Trust Fellow, and a nominee for a Stranger Genius Award. He has had work published in The Seattle Review of Books, NAILED,  Poetry Northwest, McSweeney’s, and The Cascadia Review. His poetry was also featured in such anthologies as Many Trails to The Summitt, Foot Bridge Above The Falls, Get Lit,  Make It True, and It Was Written. His previous books include The Homeboy Songs (2014), and Up South (2017), both published by Small Doggies Press. In 2019, The Homeboy Songs was named by Entropy Magazine as one of the 25 most essential books to come out of the Seattle area.

Did you miss the official launch of Gina Hietpas’ debut poetry book, Terrain,on September 10th? Don’t worry if you did, we recorded the event so those who didn’t get a chance to join us could tune-in later! Watch the video below to hear Gina read from Terrain, and to hear a short Q&A with the author afterward. Enjoy!

INTRODUCTION: Gina was introduced by Tim McNulty, a poet, essayist, and natural history writer. He is the author of three poetry collections: Ascendance, published by Pleasure Boat Studio, In Blue Mountain Dusk, and Pawtracks, and ten poetry chapbooks, including Cloud Studies, published by Empty Bowl. Tim is also the author of eleven books on natural history, including Olympic National Park: A Natural History (4th edition released in 2018 from University of Washington Press), and Washington’s Mount Rainier National Park. He contributed an introductory essay to a reissue of Murray Morgan’s Olympic Peninsula classic, The Last Wilderness. Tim has received the Washington State Book Award and the National Outdoor Book Award among other honors. He lives in the foothills of Washington’s Olympic Mountains and is active in Northwest environmental issues. Tim’s website is timmcnultypoet.com.

Q&A: After Gina’s reading, Holly J. Hughes moderated the short Q&A session between Gina and audience members. Holly is the author of Hold Fast, Passings, and Sailing by Ravens, co-author of The Pen and The Bell: Mindful Writing in a Busy World, and editor of the anthology Beyond Forgetting: Poetry and Prose about Alzheimer’s Disease. Her fine art chapbook Passings received an American Book Award in 2017. After commercial fishing for salmon in Alaska, skippering a 65-foot schooner, working as a naturalist on ships, and teaching writing at the college level, she now lives on the Olympic peninsula, where she leads writing and mindfulness workshops in Alaska and the Northwest and consults as a writing coach. Find her online at hollyjhughes.com