Exactly one year ago, Blue Cactus Press opened for business and started working towards publishing our first book. One marvelous year later, we’re back at it again! BCP is celebrating our one year anniversary with a special announcement about our newest, upcoming book by a truly talented author, Samuel Snoek-Brown.

END_OF_DOCUMENT_TOKEN_TO_BE_REPLACED

The holidays are upon us! So, before everyone gets jazzed up on sugar cookies, glittery wrapping paper and tasty Christmas cocktails, I thought I’d let you know I’m kicking 2018 off with a poetry reading at Browsers Bookshop. I’m happy to say I’ll be reading alongside Olympia poet Joanne M. Clarkson, whose work I admire very much, on January 22 at 6:30 p.m.

Joanne and I will read from our respective new poetry collections, The Fates by Joanne M. Clarkson and Still Clutching Maps by Christina Butcher. We’d love for you to join us for a wintry night of poetry next January!

More about the Authors & Their Work:

Christina Butcher is a freelance writer, podcaster and veteran from Chaparral, New Mexico. She has a passion for storytelling and community involvement. She’s a regular contributor to OLY ARTS, The Ranger, Weekly Volcano and Thurston County Chamber of Commerce’s VOICE Magazine. Her writing has also appeared in City Arts, Creative Colloquy and Hilltop Action Journal. Christina’s debut poetry collection, Still Clutching Maps, was published in May 2017 by Blue Cactus Press. It explores ideas of language, power, and place as they inform a person’s ever-evolving identity. Christina holds degrees in anthropology and Chinese-Mandarin language studies, as well as a certificate in storytelling and content strategy. She lives and writes in Tacoma, Washington.

Joanne M. Clarkson’s full-length poetry collection, The Fates, won Bright Hill Press’ annual contest and was published in June 2017. This year her work was featured in the WA129 Poet Laureate Anthology, Blue Heron Review, Catamaran, Edge, Modern Poetry Review, Santa Fe Literary Review, the Ice Cream Anthology from World Enough Writers and the We’Moon Datebook for 2018. She has been the recipient of a GAP Grant from Artists Trust and a NEH grant to teach poetry in rural libraries. Clarkson has Master’s Degrees in English and Library Science. She has taught and worked as a professional librarian. After caring for her mother through a long illness, she re-careered as a RN specializing in Home Health and Hospice Care. She lives in Olympia, WA, and serves on the Board of the Olympia Poetry Network.

We’ll assume you enthusiastically shouted “right!” at your computer screen when you read that.

And because we completely agree with you, Blue Cactus Press is taking part in the 2017 Cascadia Poetry Festival Small Press Fair, happening Oct. 14 at Washington State History Museum.

Blue Cactus Press will have copies of our first title, Still Clutching Maps, for sale at our booth (which we’re sharing with the amazing local poet and author Leah Mueller), information on our vision and community involvement, and recorded poems for you to listen to and enjoy as your browse the book fair. Other regional presses participating in the small press fair include Cascadia College, Floating Bridge Press, Moon Path Press, Pacifica Literary Review, PageBoy Magazine, Pleasure Boat Studio, Reckoning Press,  Uttered Chaos, Wave Books and more.

The Small Press Fair is one of several components of the 2017 Cascadia Poetry Festival, which includes themed poetry readings by prominent authors of the Pacific Northwestm guided workshops and round table discussions from Oct. 12 – 15. We hope to see you there, whether you’re buying books or simply hoping to enjoy a poetry reading. 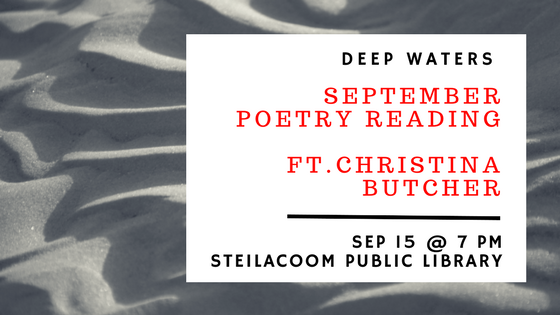 I know this is short notice, but if you’re free this Friday night please join me for an evening of poetry at Deep Waters‘ monthly gathering and open mic reading. I’m honored to be this month’s featured guest! Despite the nerve-wracking terror I feel before readings, I’m truly excited to share my work with the folks of Deep Waters. In addition to reading from my new poetry collection, Still Clutching Maps, I’ll also read newer works and chat about my inspiration for writing. I’ll have books available for sale at the event. 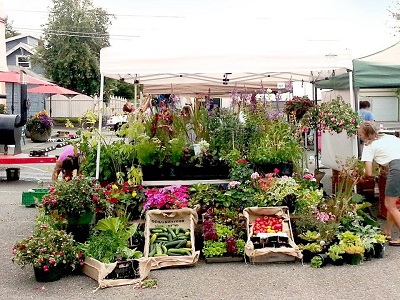 Join Tacoma authors Christina Butcher and Leah Mueller for an afternoon of book sales and readings in the summer sun! Butcher and Mueller will be at the Food for Thought booth at the Point Ruston Farmer’s Market on August 27. They’ll be selling books, chatting about local literature and poetry, and will hold short readings around noon.