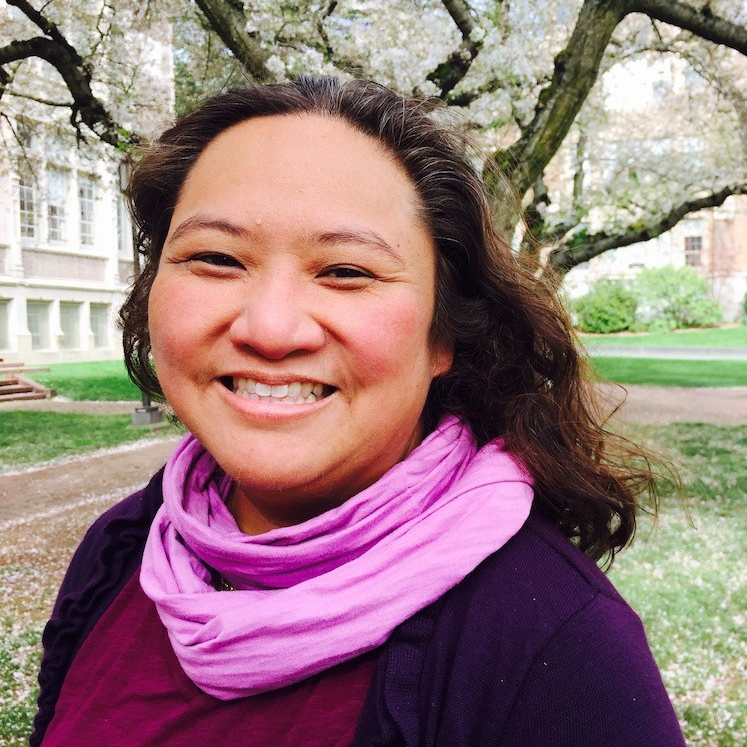 Learning From My Garden in Four Colors

An essay by Tamiko Nimura

Mid-March 2020, Washington state. Too anxious to even buy seeds. Too soon to plant seeds outside. I remember what I’d started a few years ago: my desktop garden. The ends of romaine heads, the tops of carrots, the bottoms of baby bok choy. Soon I’ve got trays of vegetable scraps on my work desk.

Daughter and granddaughter of immigrants, I begin to “upcycle” (hoard) the plastic clamshell containers for strawberries, the aluminum trays and clear covers that came with our takeout dinners.

I’m thinking of a brief exchange a year ago I had with my husband’s cousin, a scientist. We were talking about climate change, of humans’ inability to grasp the disasters at hand. “I don’t know how anyone can be an optimist,” she said, shaking her head ruefully. I looked over at my kids, who were working on a puzzle. “I’m a parent,” I said. “I have no choice. I have to be an optimist.”

I find some seed packets I’d kept from previous gardening years. Now my youngest daughter and I take plastic ice cream spoons, write the names of the plants, begin to sprinkle seeds into dirt. We shake basil seeds, which are about the size of poppy seeds, out of a paper packet. She sprinkles in a few. We take marigold seeds, which look like miniature arrows, and place them in dirt inside torn-up egg cartons.

We are creating a space inside our house that’s not contaminated, potentially dangerous. It’s not a surface that we have to wipe down. In these weeks of social distancing, six feet apart, gardening is some of what I know how to do. In a world of Zoom meetings and virtual parties, it is a space I love for its stark intimacy. At its best, gardening is all about responsive observation and attentive touch. I was missing these parts of my world before we began to shelter in place.

The first tiny green circles appear over a week later.

Ten years ago, I’d lost my job and thrown myself into gardening. I planted twice as many tomato plants in rows as I should have and the plants grew to my eye level, about five feet tall. Then summer left, and the tomatoes with it.

I’d planted rhubarb with hopes of a continued crop, but the first year’s yield was disappointing. When I harvested, the stems were spindly and too stringy –not worth much for baking or jam. The leaves of the remaining stems died and dried on the soil. I threw them into our yard waste. I thought I’d failed and killed the plant.

Rhubarb was how I discovered the magic of perennials. They can disappear above ground to the point where you think they’re not coming back. Then, it’s overcast and the end of the Pacific Northwest’s cruelest month, February. By now we’ve had months of darkness and gray. Gray skies, brown soil, then there: the first crimson nubs reappear.

There are several kinds of lavender plants, I’ve learned – not just the more familiar English and French lavenders, but also Spanish lavender. I’ve come to love Spanish lavender for its unusual blossoms – several rows of tiny honeycombed flowers on a dark base, topped with two jaunty purple petals. Some call it “bunny ear” lavender.

The Spanish lavender plant I bought last year came in a small half-gallon nursery pot. Its leaves were a little scraggly and it had a few light flowers at the end of each branch. This year, it’s grown to almost five times its original size. The blooms are lush, dark purple. It inhabits the space I’d planned for it, owns the room beyond what I’d hoped. If I’d bought it as a hopeful Coco Chanel little black dress, it’s blossomed into a debutante ball gown, petticoats and all.

I can only shake my head. I’ve done very little for this plant besides plant it in full sun in some good compost and soil, water when needed. For me, this plant is not evidence of my green thumb. I’ve said a wistful goodbye to too many houseplants. It’s evidence that sometimes, the right conditions and the right amount of attention can produce unexpected results.

In corona time I’m trying to learn from this plant. How in the world has it flourished? In my worst moments I wonder how anything can flourish in corona time. So much feels arrested, paralyzed, contaminated. On Easter, I had a panic attack, my heart beating so hard I could hear it.  Ironically, my panic tends to breed more panic – I worry about being so worried – so I spiral in aftershocks for hours after an initial attack.

My Spanish lavender plant, along with the rest of my garden, is teaching me that the world moves on, regardless of how much I think I can control it or neglect it. That what I expect and hope for can sometimes unfurl into a glorious possibility. Time in my garden moves differently, measured in new branches, green sprouts, carpets of petals from our apple tree on the grass. So much can happen and change in a year.

One April morning I was watering my garden and thought I saw a light blue piece of plastic, as if a wrapper from the neighbor’s recycling had spilled over in the wind. I shrugged and figured I’d have to just clean it up.

What I picked up was a baby blue eggshell. Thinner, more fragile than a chicken egg I would know from the store, maybe a third the size.  It may have housed a baby hummingbird, or a robin. I called my daughters over to see it.

What I thought was human detritus was something else, evidence that I am living with all this living. A reminder that something is being born, somewhere – even if we can’t see it yet.

Tamiko Nimura, a third-generation Japanese American and second-generation Filipina American, is a freelance writer, essayist, community journalist, and public historian. She just published her first book, Rosa Franklin: A Life in Health Care, Public Service, and Social Justice, in 2019 (Washington State Oral History Program). Her academic training in literature and American ethnic studies prepared her for her current projects in storytelling, biography, arts writing, public history, social justice, and community service. Tamiko is inspired by her family’s enduring love of books, the arts, and education, as well as her wider community’s collective, intergenerational spirit of “kodomo no tame ni” (for the sake of the children). Tamiko lives with her composer husband Josh Parmenter and their two daughters in Tacoma.

1 thought on “Learning From My Garden in Four Colors”