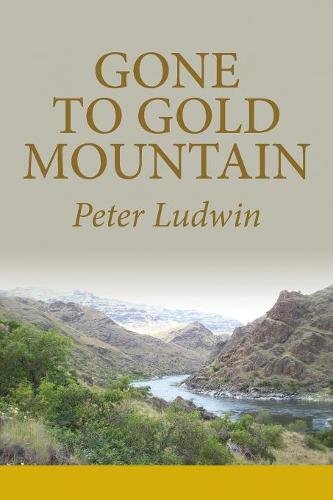 If you’re a poet living in the Pacific Northwest, chances are you’ve read Peter Ludwin’s work, or maybe you’ve heard him read in one of the cramped, dusty bookstores of Tacoma or Olympia. Chances are you enjoy his work, too, and probably agree that his poetry might be dark in tone, but it’s filled with lovely, stark images of nature and a strong narrative. Ludwin is an award-winning poet who lives in Kent, Washington, but poetry enthusiasts and writers across the Puget Sound are familiar with his work.

Over the last few years, I’ve had the opportunity to hear Ludwin read several times, including readings at Puget Sound Poetry Connection’s gathering in Tacoma and Olympia Poetry Network in Oly. Each time, I’ve been impressed with both his poetry and skills as a reader. So when I finally heard Ludwin read from his newest poetry collection, Gone to Gold Mountain, in Olympia earlier this summer, I was immediately hooked. I grabbed a copy and devoured the poems inside, all of which center around stories of Chinese gold miners in Oregon who were massacred during the late 19th century.

In Gone to Gold Mountain, Ludwin brings 19th century Chinese gold miners’ experiences of racism, physical and mental exertion, and struggles to live with aching homesickness back to life. Ludwin does an excellent job amplifying those voices and perspectives, most of which were swept under the historical rug long ago. Chinese laborers immigrating to the U.S. during the 19th century were discriminated against and treated with shocking brutality, and only recently have those injustices begun to receive public acknowledgement. And for that, for even attempting to bring these stories back into public consciousness, I’ve got to give Ludwin serious props.

Another thing Ludwin does well in Gone to Gold Mountain is mix the format and style of his poems while maintaining a strong, cohesive theme. Several of the poems are formatted as letters, some are in traditional stanza structure and others are free-flowing, but they all maintain a connection to the overarching theme. There are not poetic “stragglers” in this book. Interestingly enough, Ludwin also styled the poem titles in this collection to match classic Chinese poetry, where literal (and often long) descriptions of the content give readers let readers know what they’re in for. A few examples include “Chea Po to Sails from China to America, Late 19th Century,” “Meditations on a Chinese Minor” and “Clerk to an Investigative Reporter, Wallowa County, Oregon.”

On the other side of the coin, one of the things I don’t like about Gone to Gold Mountain is that the level of sentimentality is much too high for my taste. It seems like the narrators’ experience in many of the poems is romanticized to the point that readers are left with a one-dimensional view of early Chinese immigrants in the U.S. Personally, I would have appreciated more variation in narrators’ personalities, intentions or viewpoints, which I think is more reflective of the diversity in any given group of people, regardless of the time period.

Overall, though, I enjoyed reading Gone to Gold Mountain and I was glad to pick up a book of poetry that reflects a chapter of local history that doesn’t get much attention otherwise AND that’s written very, very well. I’ve already recommended Gone to Gold Mountain to a few people, poetry and nonfiction buffs alike, and I’ll keep doing so as long as Ludwin keeps reading at poetry gatherings around town. It really is worth it to hear his poetry come to life through his gravelly voice and slow cadence. And! Because he’ll sign the book for you, too 🙂